Velocity of money and interest rates

Since it came up in the top shared posts of 2015, I re-read this post and comments on an MZM quantity theory. John Handley left a comment about how this wasn't all that new ...

V following i has been part of economic theory for a long time. Heck, it's implicitly in IS-LM (something like log(M/P) = L(y,i) = a log(y) - bi). In more modern macro, there are models ranging from Cash-Credit models (my favorite) to Money in the Utility Function models which most people recognize how terrible this assumption is; but it's mathematically tractable. Every (I hesitate, but I'm pretty sure...) understands that V is not constant and that it empirically tracks interest rates.

He gives a couple of references [1, pdf], [2, pdf]; we'll follow the former and look at the cash-credit [CC] models. The key here to understand is the word "tracks", which isn't quite the same as "is a good model for". From [1]:

[Hodrick, Kocherlakota and D. Lucas] find that if they use the basic cash in advance model, whether it be that of Lucas or Svensson, they cannot generate under any plausible scenario enough variation in the velocity of money. For instance, over the last 100 years the velocity of money has had a standard deviation of around 4.5% but with the basic cash in advance model they cannot generate a standard deviation any greater than 0.09%. However, the cash-credit CIA model can generate more plausible numbers for the variability of velocity, with the numbers ranging between 0.6 % and 5.1%. However, to generate these more plausible numbers the authors have to assume very high levels of risk aversion. As a consequence, while they can explain observed volatility in the velocity of money they are unable to account for several other features of the data, such as the low level of actual interest rates.

This is moment matching (getting the same standard deviation for fluctuations); if we take the basic model in the end of [1] with V being velocity and i being the long term interest rate (see also IS-LM model below), there is indeed a linear relationship between V and i:


The parameter α represents the relative weighting of utility between goods that can be purchased with cash versus credit. From the text: "This varies positively with the rate of interest ... and so potentially the model is quite realistic." Yes, potentially. The best fit I was able to achieve is this: 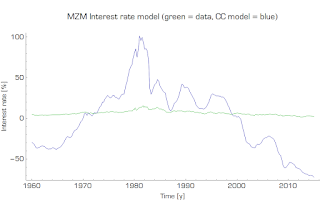 If you look at the fluctuations, they actually do track each other. We'll make it more obvious (and make the model work better) by performing a linear transformation on velocity:


Now the best fit looks a bit better (showing the [smoothed] fluctuations this time -- the linear transformation is just a scaling of the fluctuations):

They do track each other. The information equilibrium [IE] model still works much better (matching both levels and rates):

The IE model is:

Based on the information equilibrium relationship

As John correctly states, the IS-LM's downward sloping LM curve does sort of imply a linear relationship between velocity and the interest rate. Starting with:

... which is a downward sloping curve for a and b positive (as they are). I do put together an empirically accurate form of the IS-LM model in this post that instead uses investment and the monetary base (as opposed to MZM). One important piece of that model is that it looks at the short term interest rate instead of the long term interest rate, which is more relevant to policy as the Fed sets short term interest rates. The information equilibrium relationships are:

Where I is investment, MB is the monetary base, p is the price of money, i is the short term interest rate, and c is an irrelevant price in the investment market. Two additional notes:
...

With some tweaking I was able to get a pretty decent fit with the modified CC model: 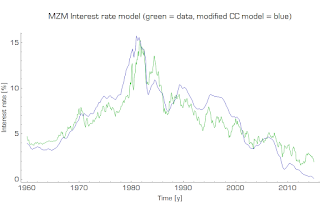