Is CPI an information-theoretic measure of labor force size?

Update 23 Jan 2016: Since this post is getting a lot more traffic than I expected, I'm adding a direct link to what is meant by information equilibrium and to my paper:

which means that the inflation rate is a times the labor force growth rate. This gives us a decent model (after adding a lag and smoothing the CLF -- a surprisingly noisy measure):

This tells a different story of inflation in the US than exists in the mainstream, especially if you compare the CLF growth rate with the population growth rate: 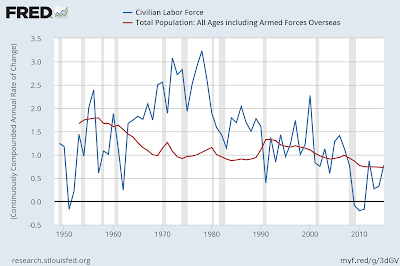 During the 1960s and 70s, we had a labor force growing faster than population -- typically associated with people other than white males entering the labor force (women, African Americans). This coincided with the period of high inflation in the US. As always, there is a question of causality -- the fit at the top of the post chose a lag of y₀ = 0.33 years with CLF increases causing inflation about 4 months later.

The usual story of the end of the so-called great inflation of the 1970s was that the Volcker Fed managed to credibly rein in monetary policy, reducing inflation.

The new story is that either 1) the Fed was superfluous, or 2) the Fed's impact came through a different channel. In 1), the labor force had reached its new equilibrium participation rate, so it stopped growing as fast, lowering inflation. In 2), the Fed-caused recessions of the 1980s killed the rise in labor force participation (setting up the new equilibrium).

The lowflation in Europe, the US and Japan may simply be low population growth -- and independent of the ECB, Fed. and BoJ. This would also mean inflation targeting by the central bank is a case of Feynman's cargo cult science -- they literally had zero control except to cause recessions by creating a coordinating signal for sunspots [1].

Increasing labor force participation just leads to a spike in inflation that can last several years (as the US saw in the 60s and 70s). To generate sustainable inflation, governments would need to increase the population growth rate.

These posts on the "miracle" of a 2% inflation target ("magic number") alongside 2% inflation are relevant as well:

Footnotes:
[1] In Farmer's paper Global Sunspots and Asset Prices in a Monetary Economy, the Fed is Mr. W (the coordinating source of "sunspots"):