The 1st estimate of 2015 Q4 NGDP data is available on FRED today. It appears Hypermind has removed its NGDP predictions before I had a chance to update them in the graph (and Scott Sumner has removed it from his blog's front page). So all I have to go with is the data I had when I made the graph back in July after Q2 results. Here are the updated graphs, now with annual and quarterly predictions/data separated (last Hypermind predictions are in black, previous in grays): 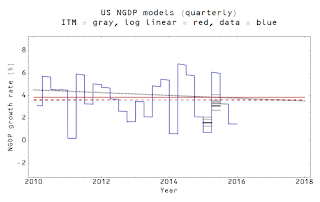 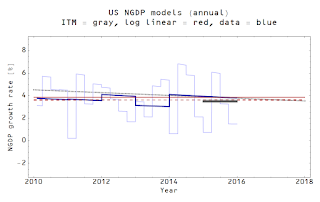 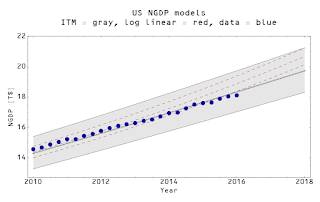 The prediction markets result for 2015 growth is basically indistinguishable from a log-linear extrapolation of data (shown as red dashed lines) from after 2009. The ITM (gray dashed curves) was almost exactly right, but I wouldn't read too much into that since it's not terribly different from the log-linear extrapolations (all time: solid red, since 2009: dashed red) itself.

Hypermind's blog doesn't mention the NGDP markets except generically mentioning macroeconomics: "All the predictions so far have been about politics, geopolitics, macroeconomics, business issues, and some current events." They do show a funny plot that I've seen in the research before: 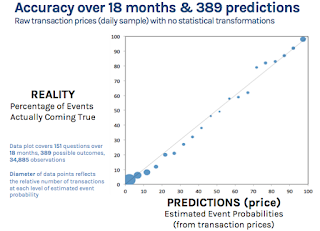 The information transfer view predicts this sort of result from purely random behavior as I show in this blog post from last October:

The data is closer to the line in the Hypermind case simply because there were more markets and measurements, making the ideal information transfer picture a better approximation.
Posted by Jason Smith at 12:47 PM