Maybe we should fall back on the least informative prior ...

This made me laugh out loud (H/T Mark Thoma):

Max Burton-Chellew ... said: 'Game theory can be used to predict how a self-interested and rational person will behave in social situations. However, economic games, in which people have to make decisions on how to allocate money to themselves and others, have consistently shown that these predictions fare poorly. In particular, it seems that people are overly generous and altruistic, and appear to be primarily motivated by concerns of fairness rather than maximising income. ...'

This has led to the conclusion that there are different social-types of people that can be reliably classified in the lab, and that most people care about fairness so much that they are even willing to forego their own success to help others. These people are known as "conditional cooperators", and the results primarily come from one type of experiment called the public-goods game ...

Dr Burton-Chellew said: 'We found that many of the so-called conditional cooperators are confused and do not seem to understand the public-goods game, appearing to think that being generous towards others will make them money. We primarily demonstrated this by having them play with computers, which cannot benefit from this cooperation, and showing that people behaved the same way regardless. ... '

My emphasis. As I've said before, the least informative prior for the result of the public-goods game is a 50/50 split. You will choose between 0 and N tokens to contribute to the public; a maximum entropy (least informative) prior leads to the prediction of N/2 ... regardless of whether you are playing with computers or humans. Utility maximization, game theory and evolutionary arguments lead to incorrect conclusions. Humans are confused and don't understand what is happening -- how can you expect rational utility maximization to be happening? How can you presume intelligence (as Paul Krugman does)?

Another win for maximum entropy. 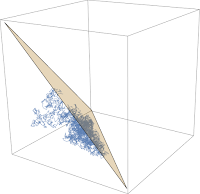