Dietz Vollrath has a nice post about economic growth, real and nominal. It's a great pedagogical introduction to the mainstream growth econ view of things. For example, he says:

Whether nominal GDP rises or not is completely irrelevant to whether real GDP goes up.

Emphasis in the original. And this is true of growth econ. But it's not true in practice; the two time series track each other fairly closely implying some kind of relationship (data from FRED): 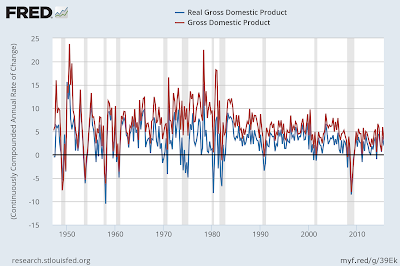 Now this is usually attributed to the central bank maintaining stable inflation, in which case real growth ρ would be just nominal growth ν, minus some central bank established rate of inflation π₀:

As an aside, the divine coincidence was the belief that stabilizing inflation would stabilize growth (output gap) as well. Anyway, this means the explanation for ρ tracking ν is that they are independent, but the central bank controls inflation. Which makes this statement from Vollrath interesting (this quote cuts across a few paragraphs):

The end result is that the mainstream growth econ explanation for ρ tracking ν is that they are independent, and the price level is irrelevant, but the central bank controls this irrelevant price level in order to reproduce the empirical fact that ρ and ν fluctuate together.

Is this starting to feel a bit Rube Goldberg-y to you?

In the information equilibrium (IE) model, you don't need to have the central bank controlling inflation to get the same result. Using the model at the bottom of this post, we have (if μ is the growth of the relevant money supply and k is the information transfer index)

Basically, nominal and real growth are roughly proportional to each other, which explains the correspondence in the empirical data without the central bank having an impact. If k = 2, then we have the quantity theory of money and

Note the historical average is ν/ρ ≈ 1.87 (1.31 after 1980). But a changing k doesn't interfere with the result that at any given time we have ν ~ k ρ. It's a simpler way to explain the empirical data. Real and nominal growth track each other because they aren't independent -- not because they are independent and something makes them dependent.

Just because it is simpler doesn't make it the real explanation, though.
Posted by Jason Smith at 1:55 PM