According to Bennett McCallum [1], the quantity theory of money (QTM) is the macroeconomic observation that the economy obeys long run neutrality of money (it's not just MV = PY).  This Implies supply and demand functions will be homogeneous of degree zero, i.e. ratios of $D$ to $S$ such that if $D \rightarrow \alpha D$ and $S \rightarrow \alpha S$ then $g(D,S) \rightarrow \alpha^{0} g(D,S) = g(D,S)$. The simplest differential equation consistent with this observation is


If we take D = NGDP and S = MB, this equation does well over segments of the price level, with different values of κ (which I'll just call the IT index for now): 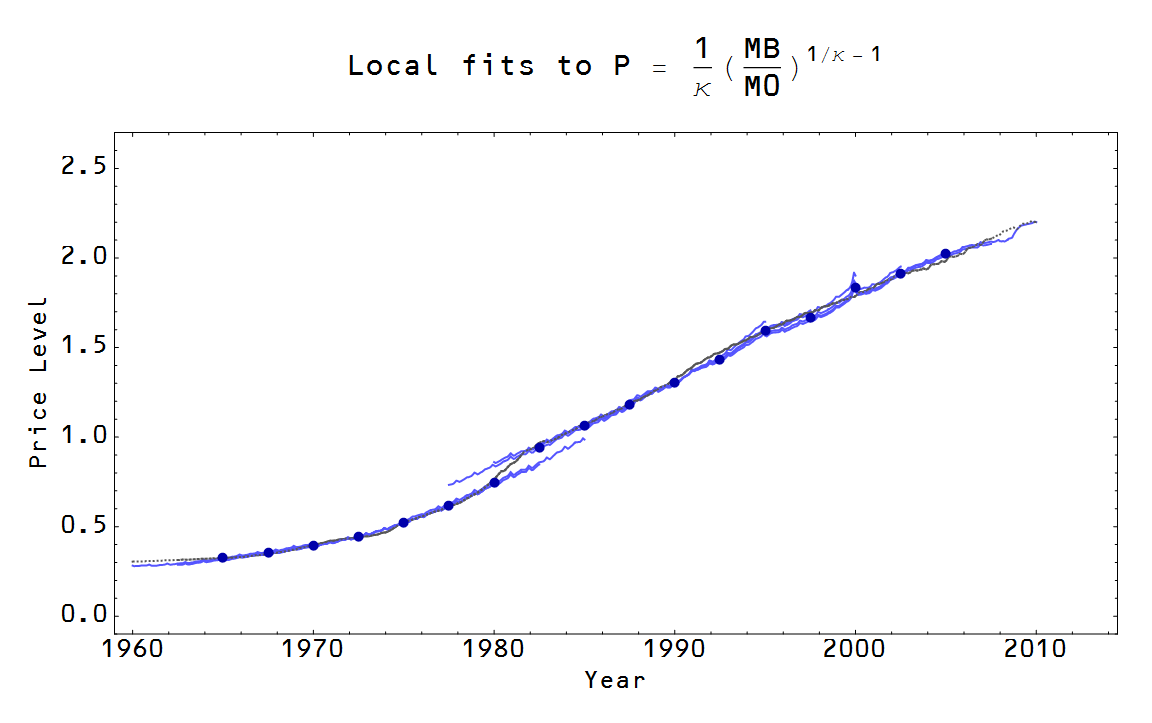 If we let $\kappa$ become $\log S / \log D$ [2] then with $D, S \gg 1$ and $\alpha$ small (i.e. small changes in NGDP or MB), there is still approximate short run homogeneity of degree zero. Additionally with S, D → ∞ with S/D finite, we have "long run" homogeneity of degree zero in a growing economy [3]. And it turns out the best fit to the local values of κ is approximately log MB/log NGDP (measured in billions of dollars): 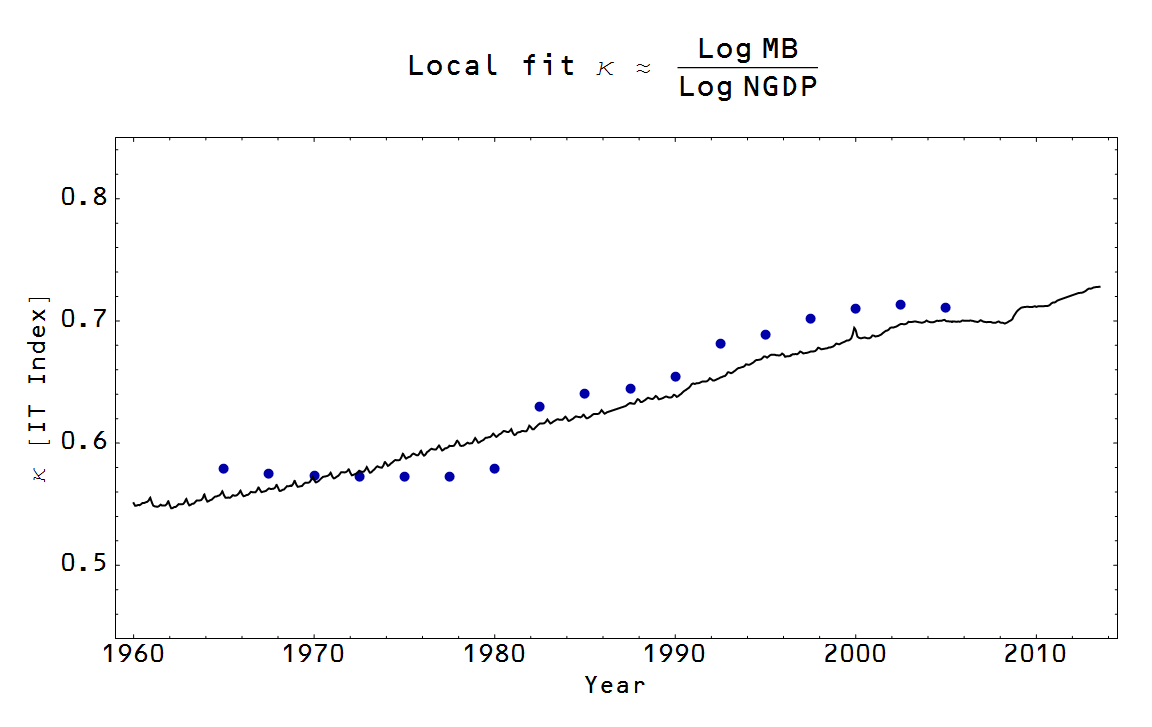 But why should we be satisfied with (1)? In Part II, we'll motivate the equation via information theory. In this Part I, we'll resort to one of my favorite topics from physics: effective field theory.

A general homogeneous differential equation (of first order) is given by


Where $g$ is an arbitrary function. This would capture any possible (first order) theory of supply and demand for money with long run neutrality. A Taylor expansion of $g$ around $D = S$ results in an equation of the form


Note that higher order derivatives by themselves are not consistent with homogeneity. If we take D→α D, S→α S means that d²D/dS² → (1/α) d²D/dS². Terms like D d²D/dS² would be necessary, which we'll subsume into "generalized" second order terms.

So what's this about effective field theory? In physics we write down a Lagrangian of the form

The higher order terms in field theory (4) represent higher order interactions (2, 4-particle, etc interactions with coupling constants $g_1$, $g_2$). They tend to be "suppressed" (in physics) because the coefficient has dimensions of mass and that mass is considered "heavy". The higher terms (degree > 2) in the Lagrangian represent vertices (interactions) in Feynman diagrams. 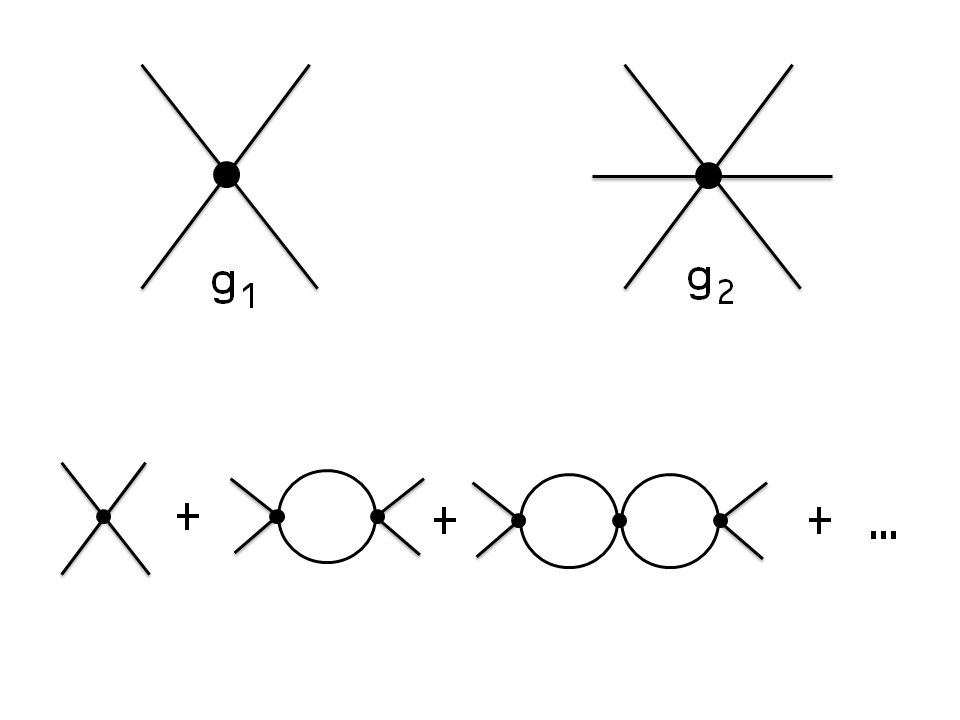 It is possible that the analogous terms in our long run neutrality of money (money invariance) theory (3) represent three or more party transactions which would be heavily suppressed by the existence of money (you'd likely trade apples for money and then get oranges with some of that money rather than work out some complicated contract between the three parties allocating money, oranges and apples). I.e. the higher order coefficients $c_2$, $c_3$, ... might be suppressed by factors of 1/MB (!) where MB is the size of the monetary base (how much money is out there). 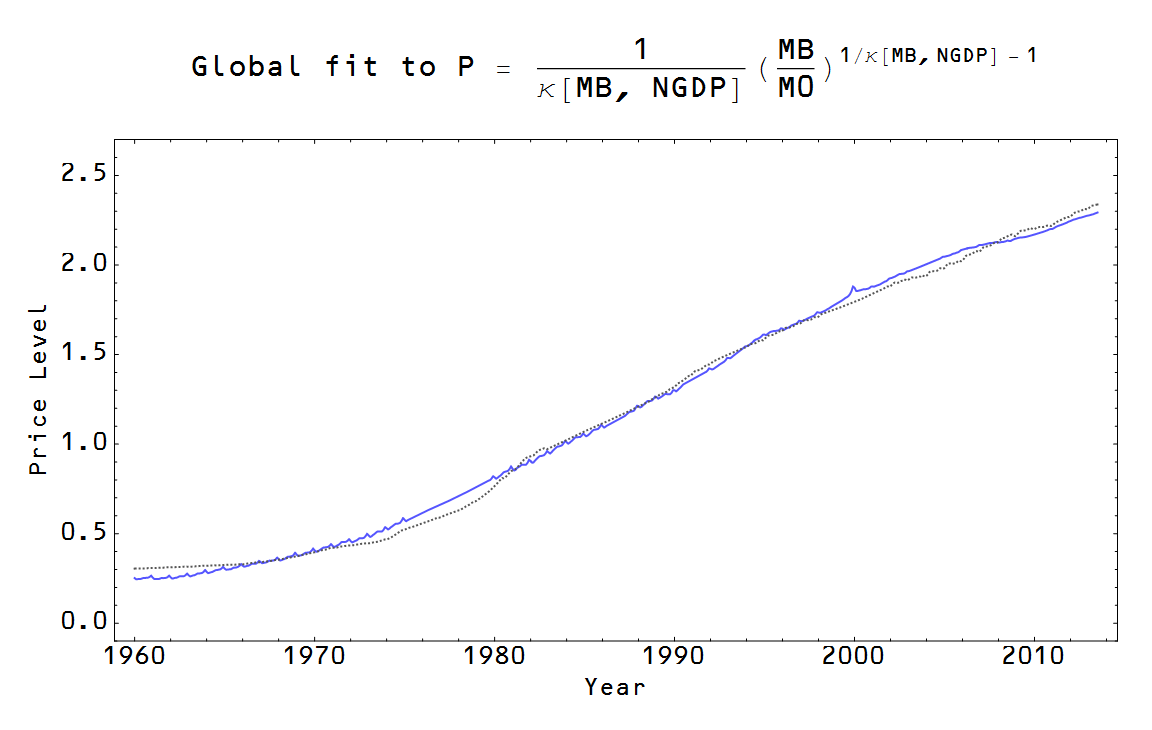 [4] We'll take c0 to be zero, too. Although we shoud be careful. Einstein famously took the equivalent of c0 (the cosmological constant) in general relativity to be non-zero in order to allow a steady-state universe. He later regretted that action, but more recent results show that it is not actually zero, but very very close.
Posted by Jason Smith at 7:04 PM