It isn't obvious inflation is under the control of central banks

Scott Sumner and Antonio Fatas think the BIS has a crazy view of inflation. If you think that central banks can achieve any amount of inflation they desire, I agree this exchange would seem crazy:

Inflation is only 0.2% in Europe and 0.5% in the US, although the central banks are doing everything in their power to drive it up to 2%. What's going wrong?

Inflation is not only a domestic and short-term phenomenon - the kind of phenomenon monetary policy can influence. Inflation also depends on global and long-term factors. The most important story is global. Ultimately, inflation is falling nearly everywhere in the world.

Of course, Sumner basically has to believe that even though the Fed says it wants inflation to head towards its goal of 2% (and will do so) [1], it doesn't really mean it. So I'm not sure which is crazier.


However, Hyun Song Shin (the BIS official interviewed in the link above) may be coming around to the information transfer view -- and the slow bending of the price level versus monetary base curve described in the paper. 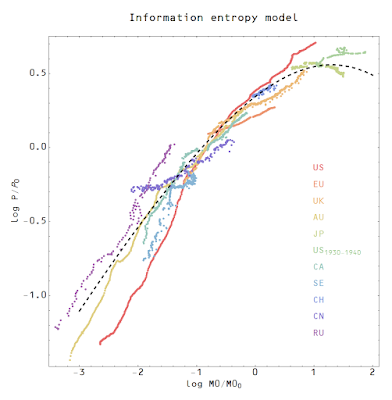 
I find this quote from Brad DeLong kind of hilarious:

The problem is that the various BIS models do not appear to codify any form of knowledge--for as their predictions are proved false by time the responses not to adjust the framework to reality but to put forward to a new framework.

I think the idea that central banks don't seem to control inflation is exactly the sort of idea one gathers from looking at the data. Several countries (US, EU, Japan) are unable to meet their inflation targets and the problem appears to be spreading to others (Canada, Australia).

Now Brad is right: the BIS is a bit of a broken clock -- always looking for a post hoc reason to tighten monetary policy. I don't think policy should be tightened. As Hyun Song Shin seems to point out: monetary policy doesn't matter (for inflation) -- so it doesn't matter if they tighten or not. Now there are additional views from the BIS -- "loose" money leads to financial instability -- that aren't necessarily supported by the data. In fact, I think tightening might even bring on another avalanche ... like the Great Recession.

... Inflation is expected to rise to 2 percent over the medium term as the transitory effects of declines in energy and import prices dissipate and the labor market strengthens further. ... The Committee judges that there has been considerable improvement in labor market conditions this year, and it is reasonably confident that inflation will rise, over the medium term, to its 2 percent objective.

Which obviously means they don't want inflation to rise to 2%. Plainly that means their objective is really 0.5%. How could you possibly read that some other way?
Posted by Jason Smith at 8:09 PM