This is a thing of beauty: 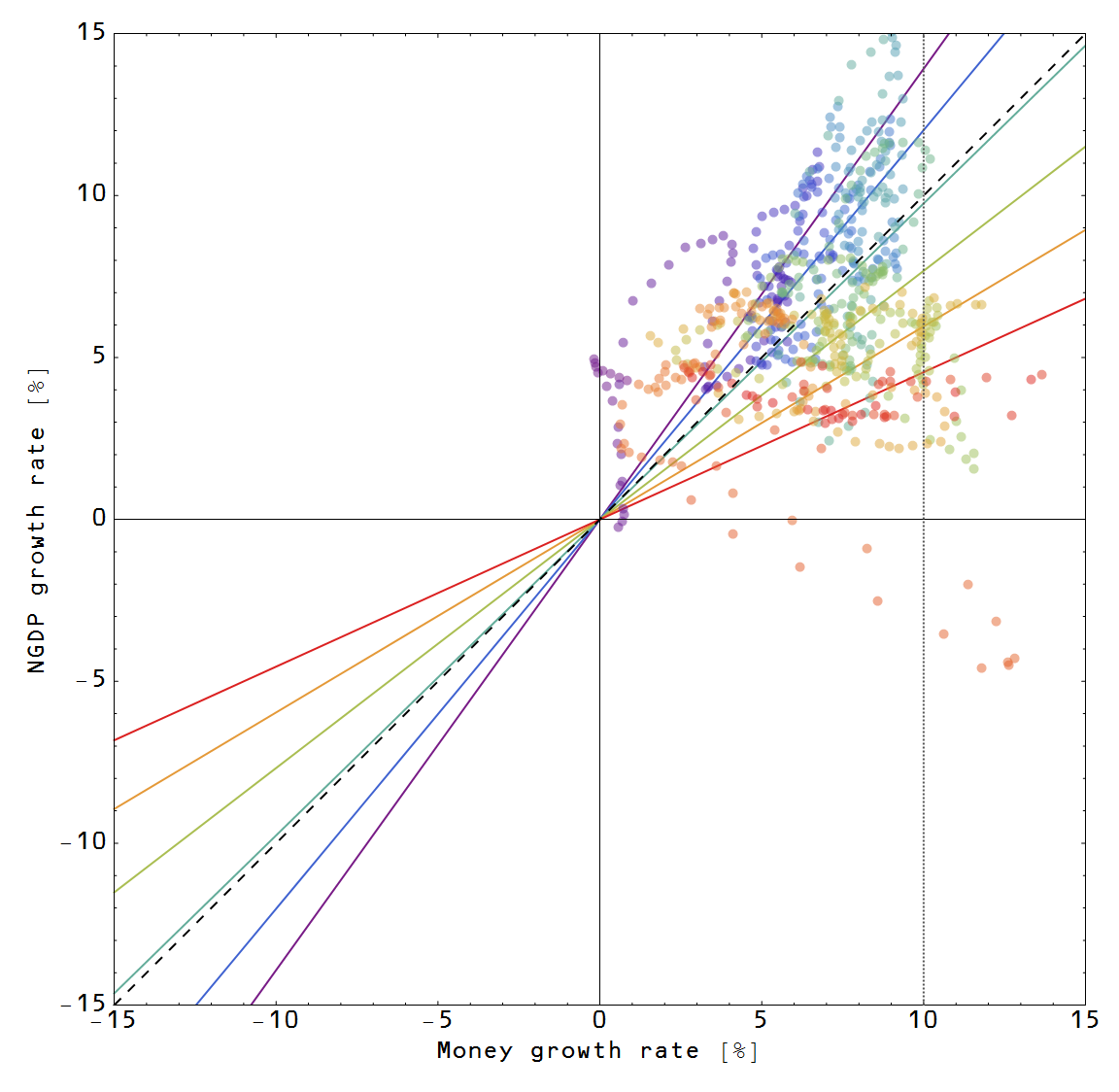 
A pure quantity theory of money would show a line. A theory that based inflation or NGDP growth expectations set by a central bank (with a significant weight put on e.g. future expected inflation) would have a more complicated relationship that would depend on the exact sequence of shocks and announcements from the central bank. Needless to say, there is no reason for the data to fall in the triangle above in the pattern fading from purple to red along the lines predicted by the information transfer model (nothing prevents it from doing so, but in that case the expectations theory wouldn't have any more content than the ITM theory).


An expectations-based theory that put its weight entirely on past inflation could achieve a similar result simply because inflation and NGDP growth have been falling over time. (The simple martingale works, but doesn't really explain anything.)

The biggest reason Paul Krugman or Scott Sumner on seeing this graph wouldn't immediately abandon their views of how the economy works (and in fact, a lot of their prior education [1]) -- aside from the fact that isn't how knowledge progresses [2] -- is that they'd say the model is based on correlations observed in historical data. Well, 1) it isn't actually -- it's based on a set of propositions (axioms) and just happens to explain historical data and 2) this is weak tea -- all theories are based on past data. At least those theories that have some contact with empirical data [3]. Pure armchair philosophy reason tends to be (somehow) immune to empirical tests. Why accept the ITM? Because empirical success. Or keep to your angels and pin-heads [4].

[1] The theory partially confirms the quantity theory of money and the IS-LM model, so some stuff gets to stay.

[2] Max Planck: A new scientific truth does not triumph by convincing its opponents and making them see the light, but rather because its opponents eventually die, and a new generation grows up that is familiar with it. This is why I put out links on teh Twitters; for the kids.

[3] I once read this line and shuddered: I recall Bob Lucas and Ed Prescott both telling me that [empirical tests] were rejecting too many good models.

[4] Sorry for the ranting bit at the end. I'm up against things like this: Since 2008 [market monetarists] been more accurate in our predictions than any other school of thought. How can you be accurate when there are no quantitative predictions? What on Earth does accurate qualitative analysis mean?
Posted by Jason Smith at 3:00 PM