Scott Sumner has apparently chosen to die on the hill of budget sequestration. He claims that the lack of a recession is vindication of market monetarism. His calculation is flawed, as I've mentioned before. And his new defense, same as the old defense, is this:

So Sumner wants to get into it, huh? Well anyone who looks at data generally agrees that choosing only two points (regardless of whether they are Q4-Q4 or Q1-Q1) to measure your effect vastly increases the influence of statistical fluctuations in the data, especially when looking at growth rates. Additionally, Q4 to Q4 measures from Q4 of 2012 to Q4 of 2013, including a full quarter of data from before the shock hit supposedly hit (at the beginning of CY 2013). But vague assertions of economists generally agreeing is good enough to outweigh a real econometric argument (the same one made by Mike Konczal, by the way).

Now maybe expectations of the sequester allow you to include GDP data from October of 2012 in your 2013 growth rate -- but if you recall, the political process had gone up to these fiscal cliffs before and averted them at the last minute. Only 50% of the sequester could have been already priced in (assuming it had a 50-50 chance of happening; your percentages will vary).

As an aside, if people generally believed in the Keynesian model, wouldn't expectations of a fiscal cliff hurt regardless of whether the "concrete steppes" of actual cuts happened? And the more credible the fiscal authority was in making changes, the smaller the actual changes have to be, right? The market monetarist model depends not only on the model being right, but that the market thinks the model is right. If you rely on expectations without the need for concrete steps, then whatever model the market believes is the actual economic model.

But the biggest problem with Sumner's argument is that the biggest percentage cuts from the sequester came in FY 2014, not FY 2013 [1]:

The additional kicker is that the cuts were only specified at a top line level. That means that affected government agencies had to figure out how to allocate the cuts (and get approval from their leadership) -- the result was that many of the cuts did not go into effect until the end of 2013 (Q3). Cuts also couldn't be made to contracts for work already delivered, so by the time the agencies figured out how to allocate the cuts, pretty much all of it had to be in the future relative to when the plan was agreed on. That means we'd be looking for a shock somewhere inside the yellow box in this diagram: 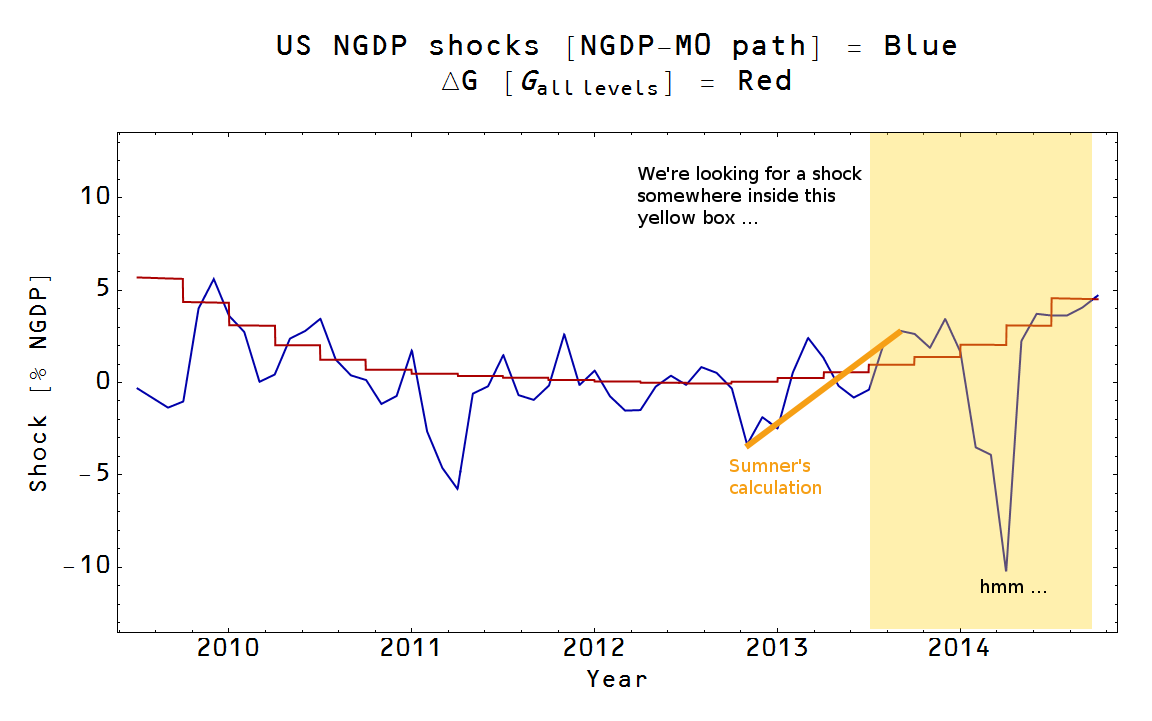 A big shock somewhere inside the yellow box. Hmm.


The red line is the smoothed version of the "first order Keynesian model". The original model discussion is here. Sumner's faulty calculation is shown as the orange line. Like I said before, it goes from a negative fluctuation to a positive fluctuation making it maximally misleading.

What is interesting is that this calculation reinforces the information transfer model in several different ways:

As a final note, I'm not sure why Sumner is focusing on this particular episode other than ego (Krugman said it was going to be a test of market monetarism). This one data point is among hundreds for different countries. Sumner does cite approvingly of a purported "takedown" of Krugman's austerity graph, but that "takedown" assumes the market monetarist model in order to throw out data (basically, all the liquidity trap countries) that make up the bulk of the correlation. Even in the information transfer model, if I throw out most of the liquidity trap countries the correlation between expansionary fiscal policy and increased growth disappears. That's true of Paul Krugman's model as well! If a country's not in a liquidity trap, monetary policy will offset fiscal changes.

It's a pattern of selecting the data to get the result you want. Now that Sumner is on his way to Mercatus, I can only assume it will get worse. We'll start seeing things like this (from my old blog). At least he didn't join Freakonomics.


[1] FY is US Government Fiscal Year where FY 2014 is (the beginning of) CY 2013 Q3 to CY 2014 Q3, where CY is calendar year (or January to December, Q1 to Q3). I have to deal with this all the time at work because my company uses calendar years, but most of my work is with government contracts that go by fiscal years.
Posted by Jason Smith at 10:29 AM