Targeting NGDP is awesome (if only it worked) 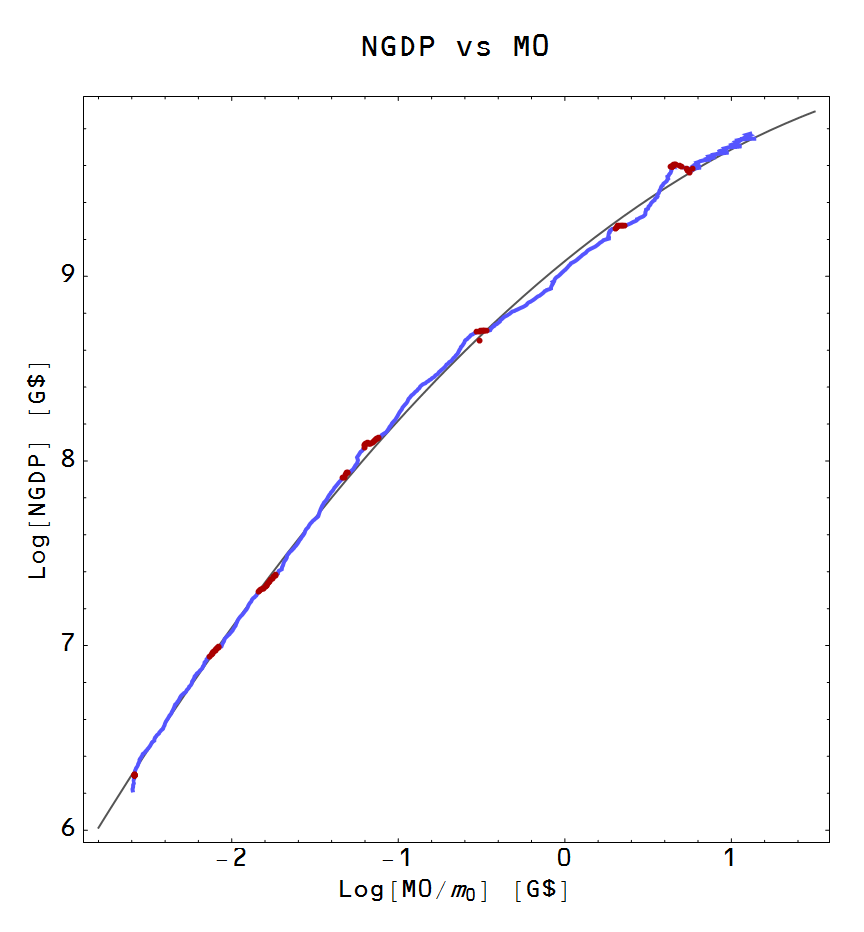 Some slight edits to the theme song from The Lego Movie.


In the previous post, I agreed with Nick Rowe that NGDP level targeting is superior to inflation targeting. It's an obvious choice between targeting no recessions and targeting no deflation during a recession.

Well, unfortunately, the ITM is an existence proof of a model where both NGDP level targets and inflation targets eventually fail -- and it's a model that fits the empirical data quite well. That means it is decidedly not obvious the central bank can do "whatever it needs to do to ensure its previously announced target will be hit".

I used the path of NGDP vs M0 pictured at the top of this post (originally derived here) and plugged that into the price level model (see here) to show how the rate of money growth (money printing) affects the inflation rate (as well as NGDP and RGDP growth) -- and how that relationship changes over time. 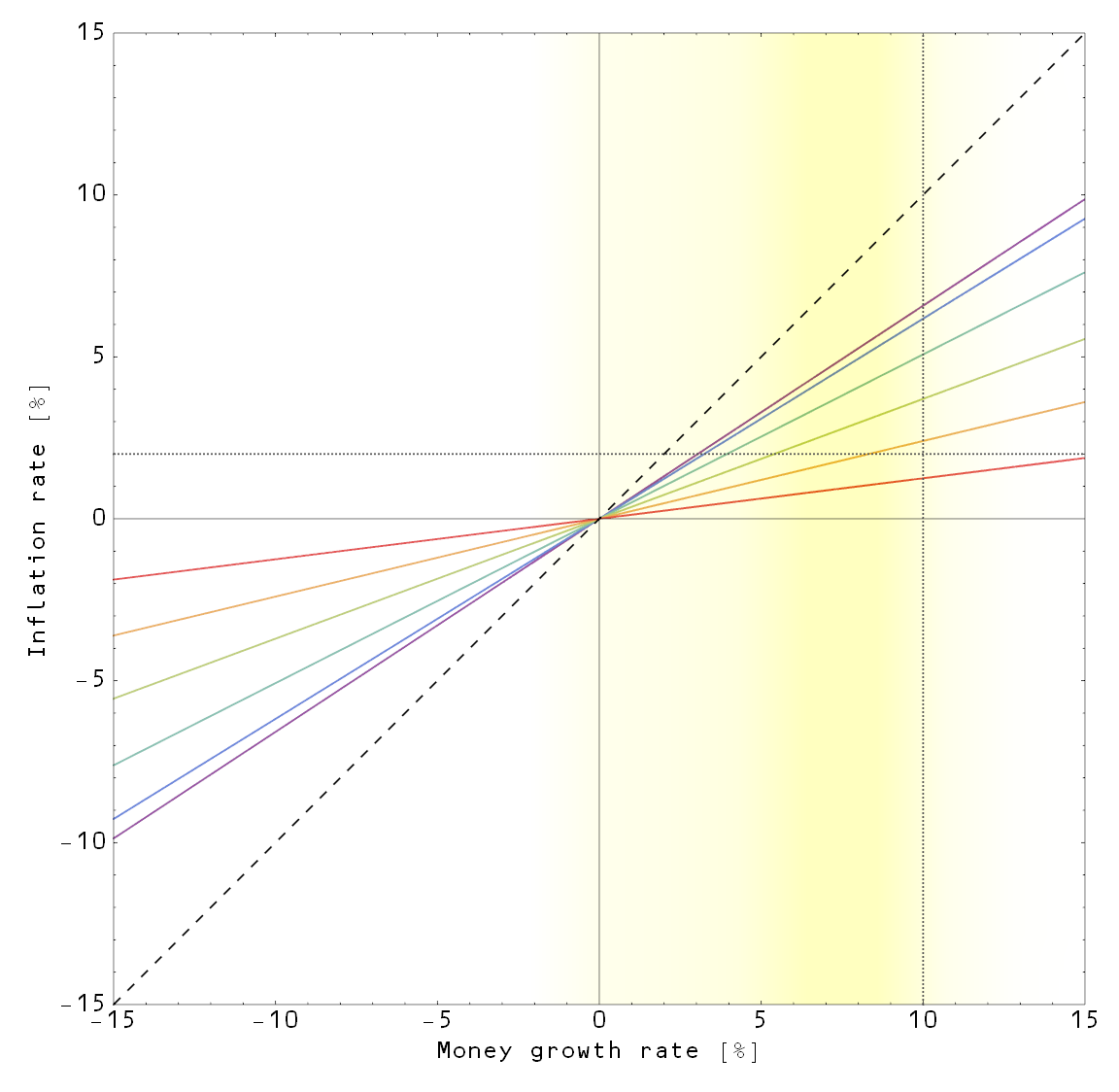 A horizontal line appears at 2% inflation rate along with a diagonal line that shows a relationship P ~ M0. In yellow, I show the distribution of money growth rates over the same period (fainter means fewer year-long periods with that growth rate). There is a fairly sharp cutoff at around 10% (marked on the chart) -- the Treasury almost never prints more than 10% more money in a given year-long period. Now it is true that it is possible to get an inflation rate of 2% in 2015 (see the end of the red curve intersects the 2% inflation line). However that requires over 15% growth in M0 -- a rate not seen since WWII.

This is why I think that central banks will eventually fail to meet inflation targets. They will be reluctant to print more and more money (in the case of the Fed, less likely to pass on banks requests for cash to be printed). That 10% value, across which the rate of printing is unprecedented, will act as a wall. It's not a hard barrier, so in principle a central bank could go right through it (as I've mentioned before here). Accelerating exponential growth in the money supply cannot be sustained indefinitely, however ... at a minimum you'd run into a logistic problem of printing physical currency.

This is not just a problem for inflation targets. NGDP targets also require accelerating base growth to sustain: 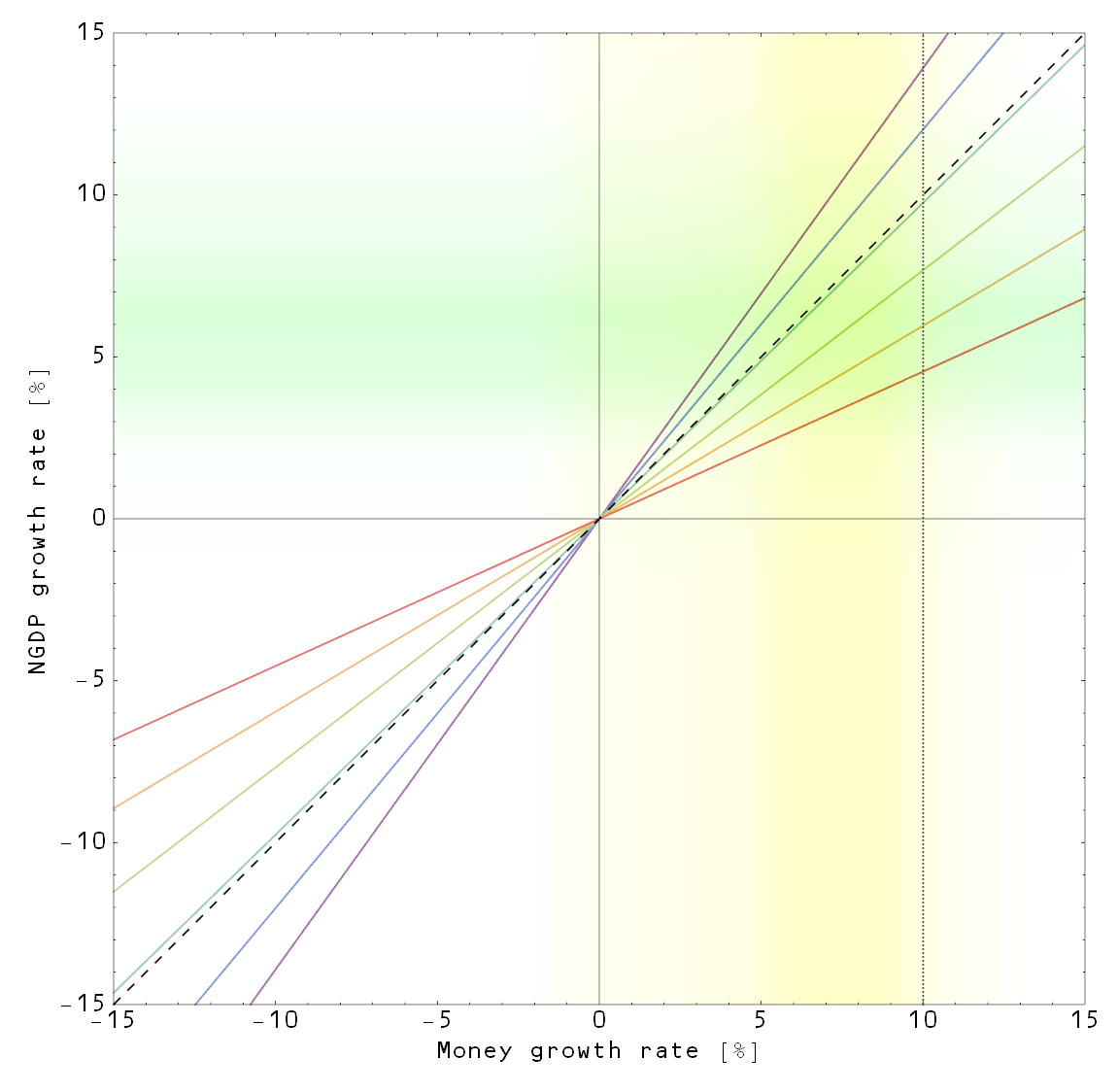 Again, the purple line is 1965 and the red line is 2015 and the ones in the middle go by steps of 10 along the rainbow. The yellow highlighted area are the typical values of currency growth. I've added the distribution of NGDP growth rates (in year-long intervals) in green. You can see how the rainbow curves span the intersection of the peaks of the distributions NGDP growth rates and the currency growth rates. What is interesting is that the rule P ~ NGDP is actually better on average over the post-war period than P ~ M0.

The line at 10% shows roughly the limit of achievable NGDP targets without printing unprecedented amounts of currency. Ironically, you could probably reach a 5% NGDP target in 2015 -- but that would become harder and harder without printing more and more money in the future.

Now that we have NGDP and inflation, we can show how RGDP growth falls over time if the central bank stays within its past performance (you read this graph the same way as the previous two): 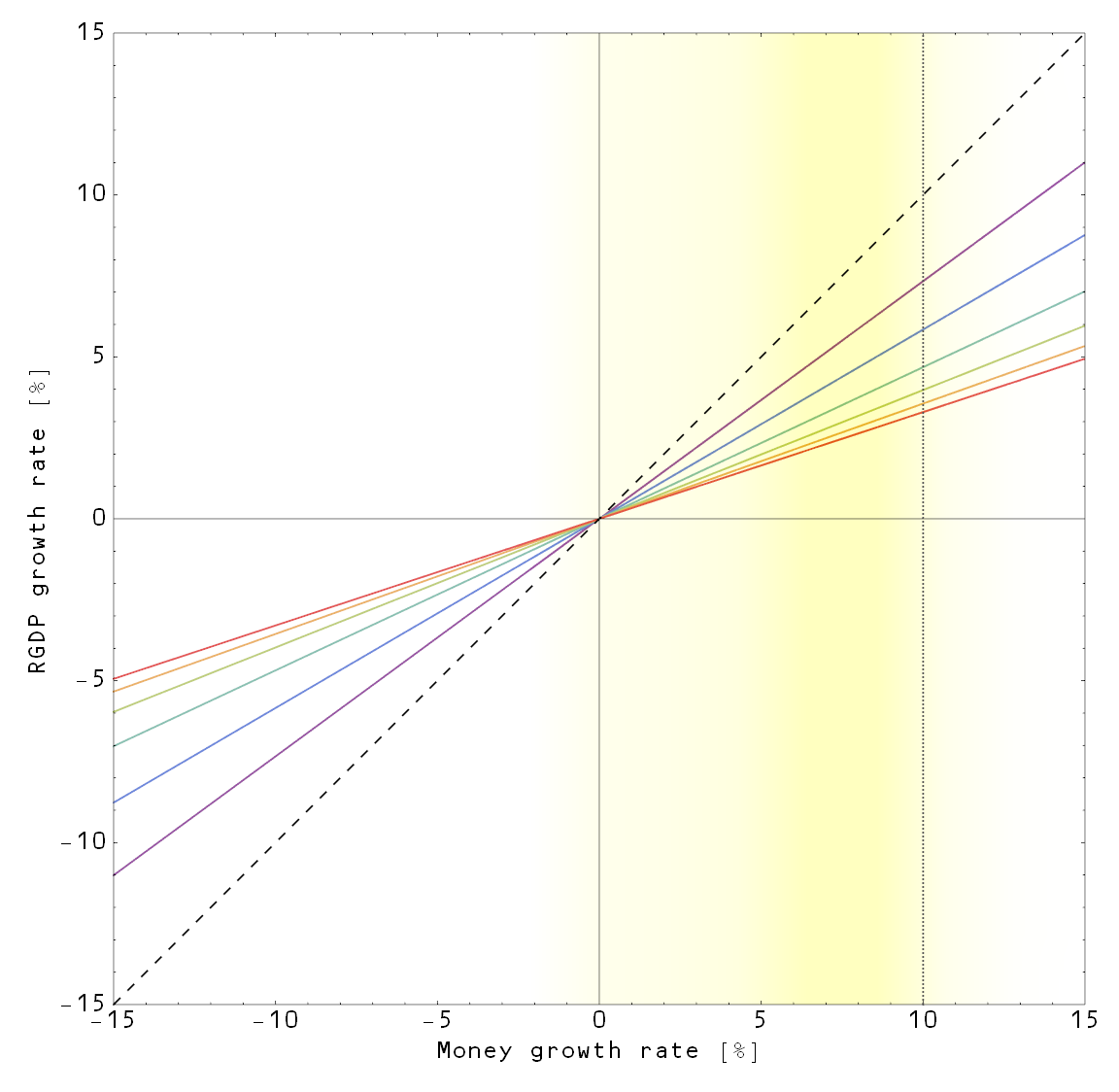 This fall in RGDP growth has been shown before on this blog and in fact if you subtract this trend, you can discover RGDP growth is a stationary random process (it does not have unit root).

Now what would you expect would happen to the rate at which the central bank prints money if it was getting harder and harder to keep inflation (or NGDP or RGDP) where you want it? If it was getting harder and harder to steer your car so that it stayed on the road, you'd end up steering the wheel more and more in each direction to correct one way and then another. In monetary terms, you'd increase the rate at which you printed money and then rapidly decrease it -- the oscillations in the growth rate would get larger and larger. Guess what: 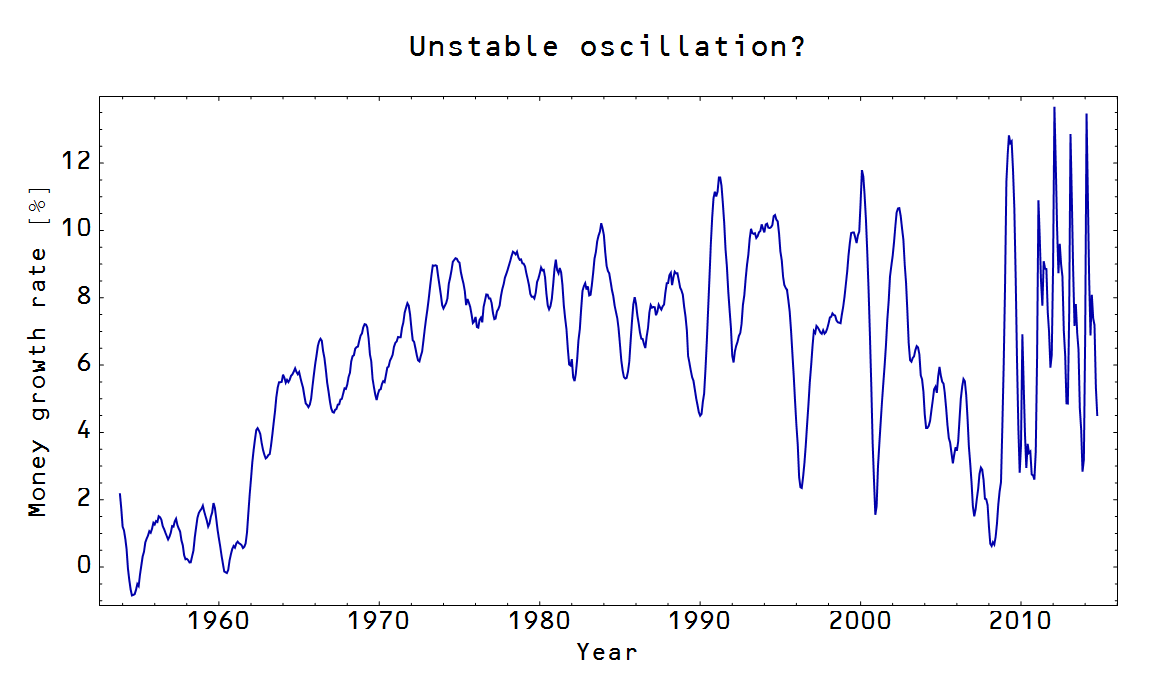 This picture reminds me a bit of a bifurcation fractal. It is the result of a central bank trying harder and harder to steer the economy. The good news is that these wild fluctuations don't have a large effect on the economy -- as we entered liquidity trap conditions, the effect of these oscillations become more and more muted.

An argument against all this is that the model is just fitting to past behavior and it can't be extrapolated to future moves from the central bank (or the economy). In part, this is the Lucas critique; it is actually somewhat more fundamental. Past empirical data may not capture the diversity of behavior. For example, if you've never seen a bird fly, your model for how a bird runs around on the ground could lead you to think it will be eaten by faster predators. This is always a problem with models and it is rare that your model leads to to believe some fundamentally new thing exists without it first being empirically observed (a few examples from physics are the positron, black holes and supersymmetry). The ITM does have some earmarks of such discoveries, though. It follows from a fundamental argument (in our case, information equilibrium; in the physics examples these are special relativity, general relativity and no-go theorems in quantum field theory, respectively), derives from a fundamental symmetry (in our case, long run neutrality of money; in the physics examples, the constant speed of light, the equivalence principle and Poincare symmetry, respectively), and it is highly empirically accurate in the range of empirically observed phenomena (well, supersymmetry hasn't been observed yet).

There are deep reasons to believe the ITM. These deep reasons might be incorrectly applied or totally off base, but they should at least be considered.

For a some different views on NGDP targeting, see Scott Sumner, Tony Yates, Cullen Roche and Simon Wren-Lewis.
Posted by Jason Smith at 10:46 AM